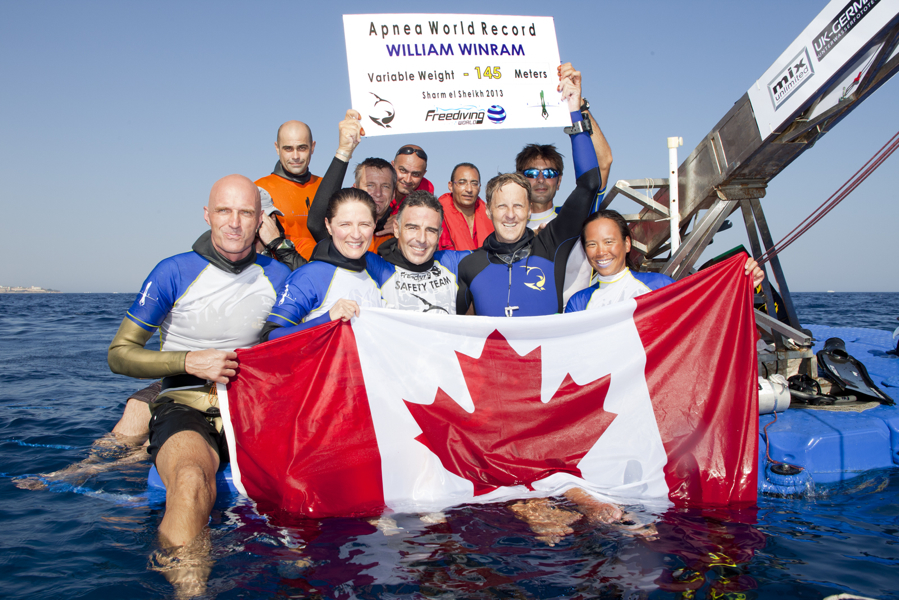 At around 3pm today, William Winram achieved a 145-meter dive in the discipline of Variable Weight (VWT) in the sport of breath-hold diving. Winram dove to the depth of 476 feet aided by a weighted sled and swam back to the surface on his own power. A special world record event was organized by Freediving World Apnea Center in Sharm el Sheikh in the Red Sea near Sharm el Sheikh, Egypt. This is Winram’s 1st world record achieved in a sled discipline and his 28th national record claimed in this sport which was made famous with Luc Besson’s movie The Big Blue.

Like in the film The Big Blue, William Winram used a weighted sled to descend to a depth for which he trained over the past eight weeks under the guidance of Swiss & Italian national record holder Andrea Zuccari. However, unlike the freedivers in the film who used an air bag to ascend effortlessly (a discipline called No Limits), Winram ascended on his own power.

“This is called Variable Weight” says Grant, one of the officiating judges. “It is one of the most difficult discipline in the sport of freediving, as there is no effort getting down but all the effort getting back to the surface. The athlete has to make sure he can return on his own power. It is in my opinion the most mentally challenging discipline in the sport of breath-hold diving.”

“I have struggled with equalization since the beginning of my career in 2005”, says Winram, “and it’s only for the past two years after working with Andrea Zuccari that I have been able to overcome that issue. With the world record today, I am very happy to have achieved this personal goal but I am most happy about the road I travelled to get here.”

Director of Freediving World Apnea Center in Sharm el Sheikh and organizer of the event Andrea Zuccari says: “With this dive, William Winram has proven he is nowhere near his limit when it comes to the time spent holding his breath. Once he masters equalization, he will reach greater depths and break more world records. I look forward to further working with him to help him achieve his goals.”

William Winram is not only an accomplished competitive freediver who has medaled at the world championships and broken world records, he is also involved in ocean conservation, particularly shark conservation. Recently named Ocean Ambassador for the Global Marine and Polar Programme of the IUCN, he is hoping this record will help him bring more media attention to the plight of these endangered apex predators.

He will be leaving Sharm el Sheikh in a few days to attend the GSCA (Giant Screen Cinema Association) International Conference and Trade Show in Ottawa, Canada, where he will be promoting the recently released Great White Shark 3D, an IMAX film featuring Winram and colleague Fred Buyle.