William Winram | The Journey is the Measure of Success
1138
post-template-default,single,single-post,postid-1138,single-format-standard,ajax_fade,page_not_loaded,,select-theme-ver-4.2,wpb-js-composer js-comp-ver-5.4.4,vc_responsive
November 5, 2021 In News

The Journey is the Measure of Success 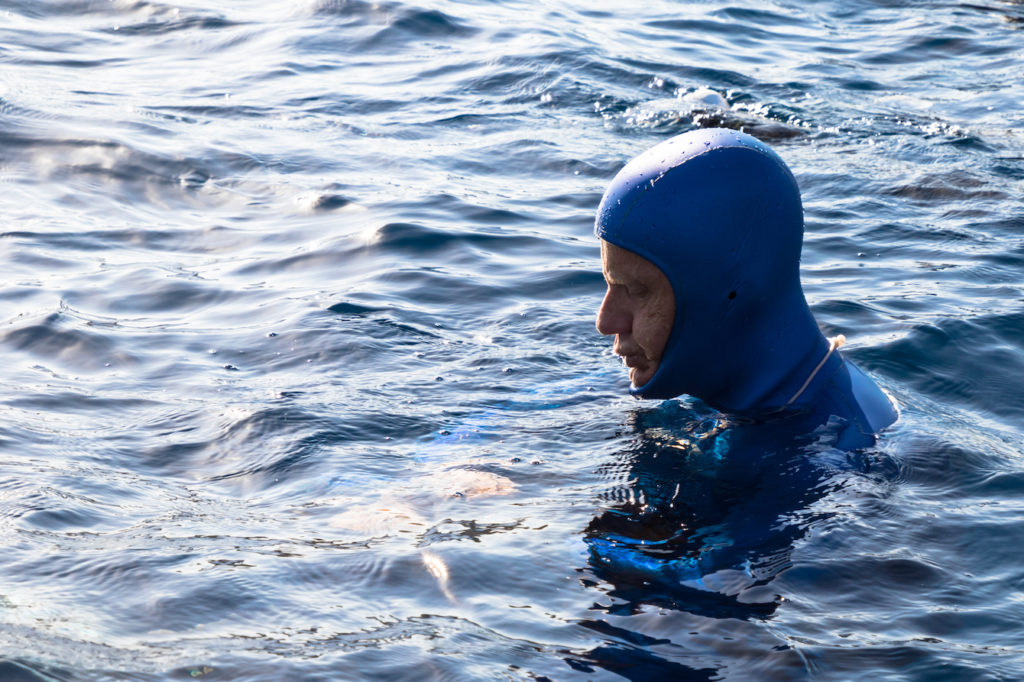 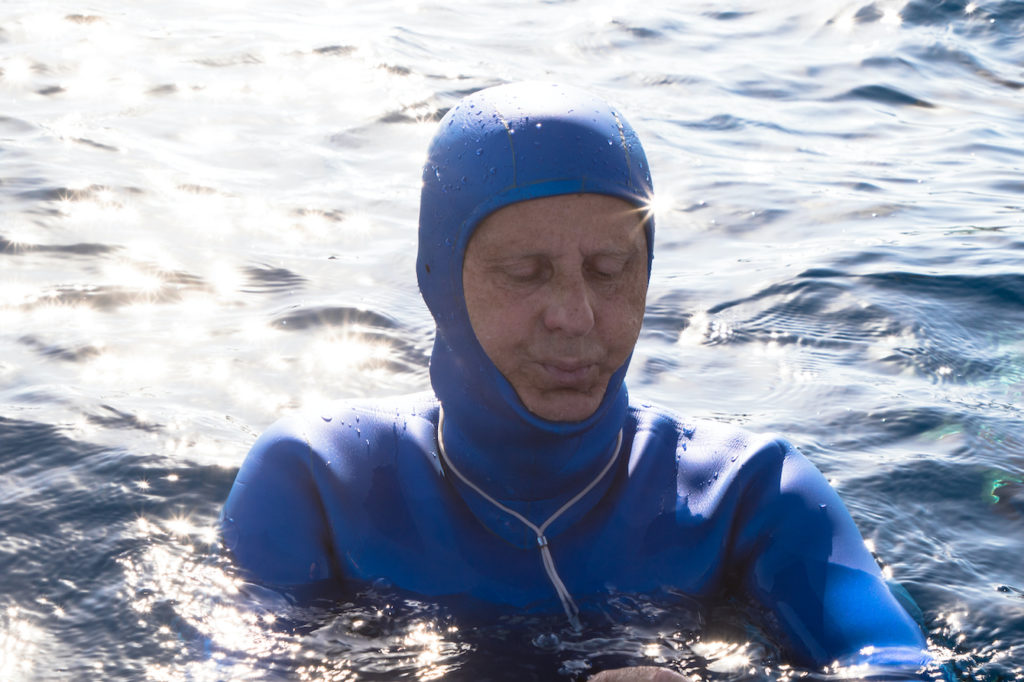 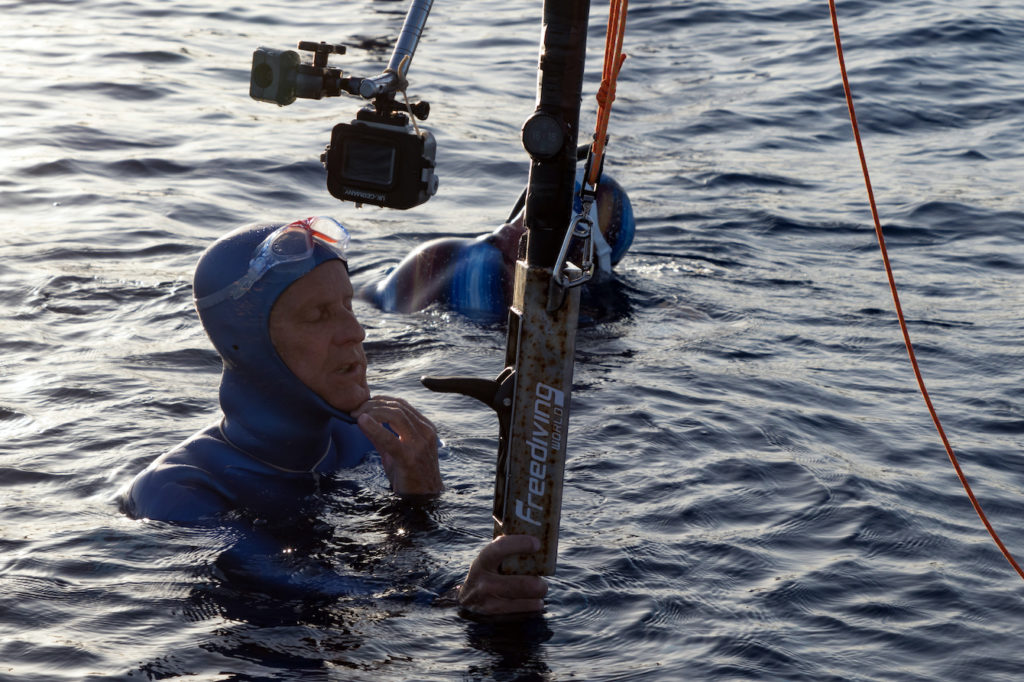 Much like in Luc Besson’s movie Le Grand Bleu, William Winram dove in the Red Sea using a weighted sled. But unlike the movie, he swam back to the surface on his own propulsive power with a pair of fins, on a single breath of air, without the use of an airlift bag nor using the rope for traction on the ascent. 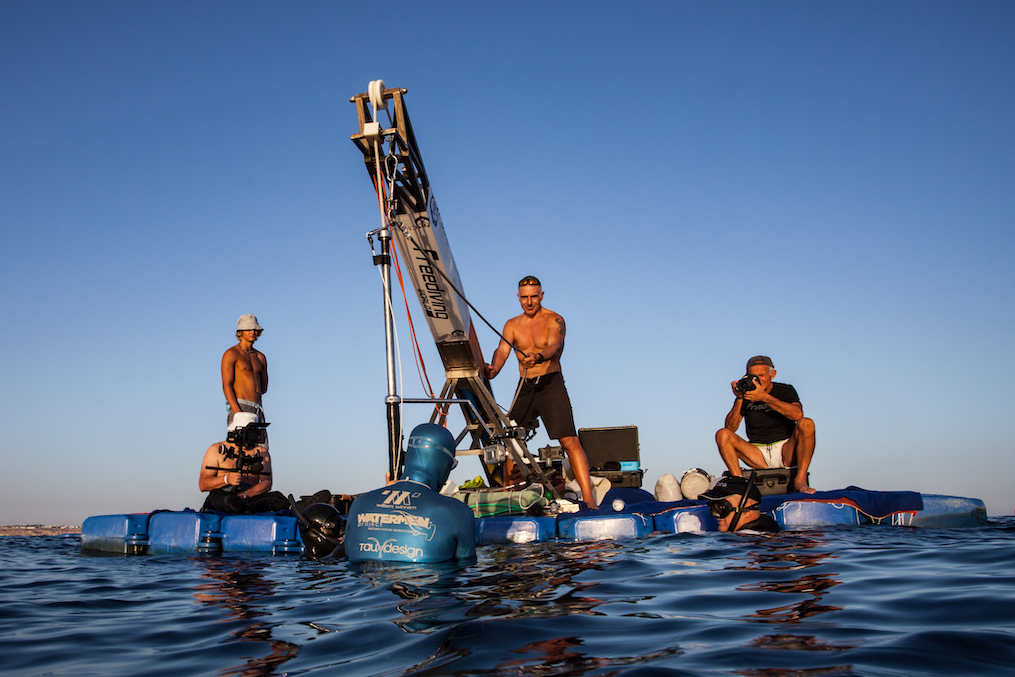 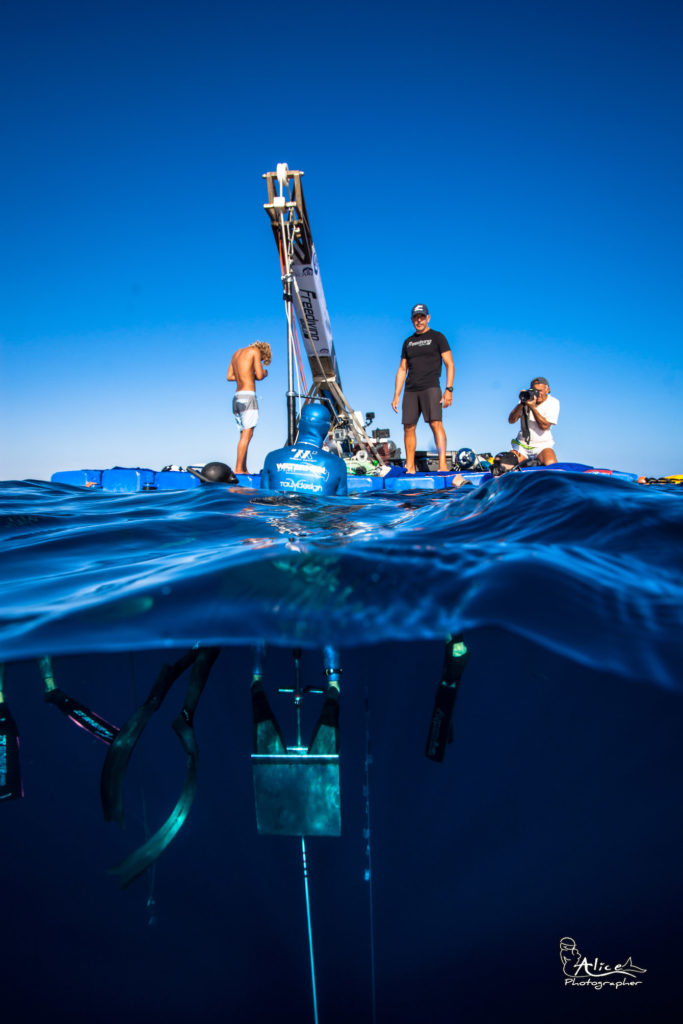 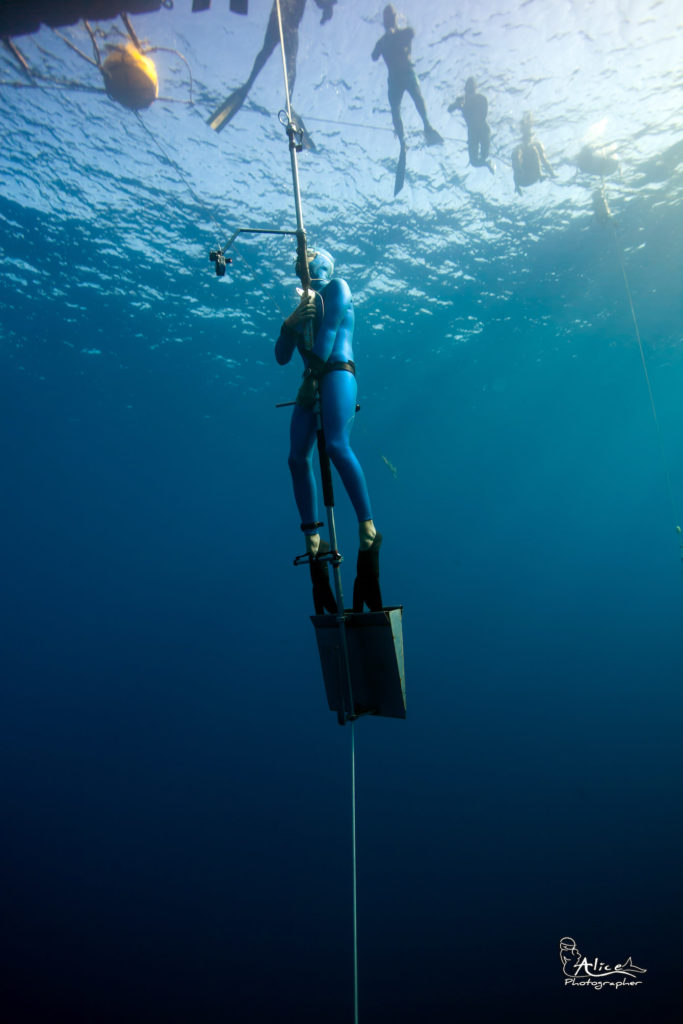 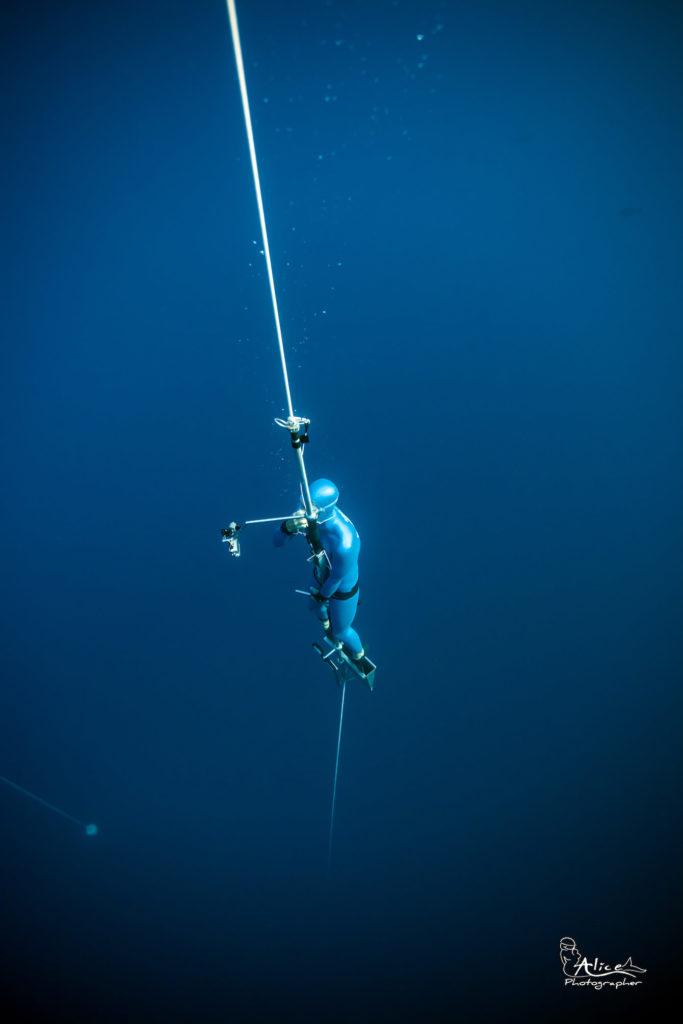 While his neoprene suit gave him buoyancy from 30 meters upward, the suit actually compresses below that depth placing him in state of negative buoyancy making him sink. So swimming up from 130m requires coordination, and a paced bifin kick to last the distance. 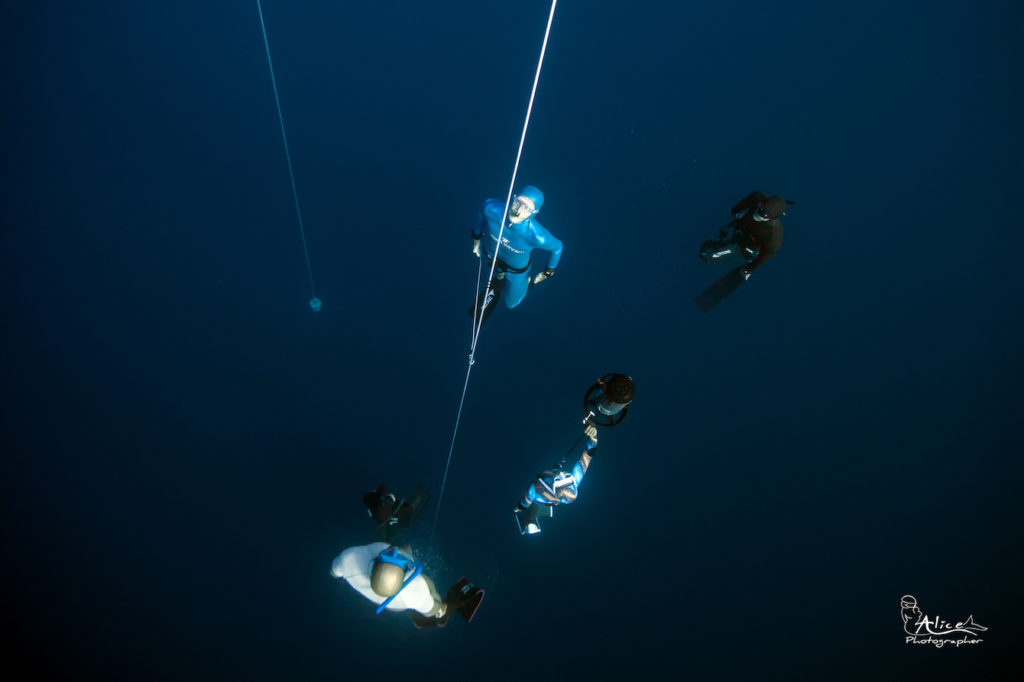 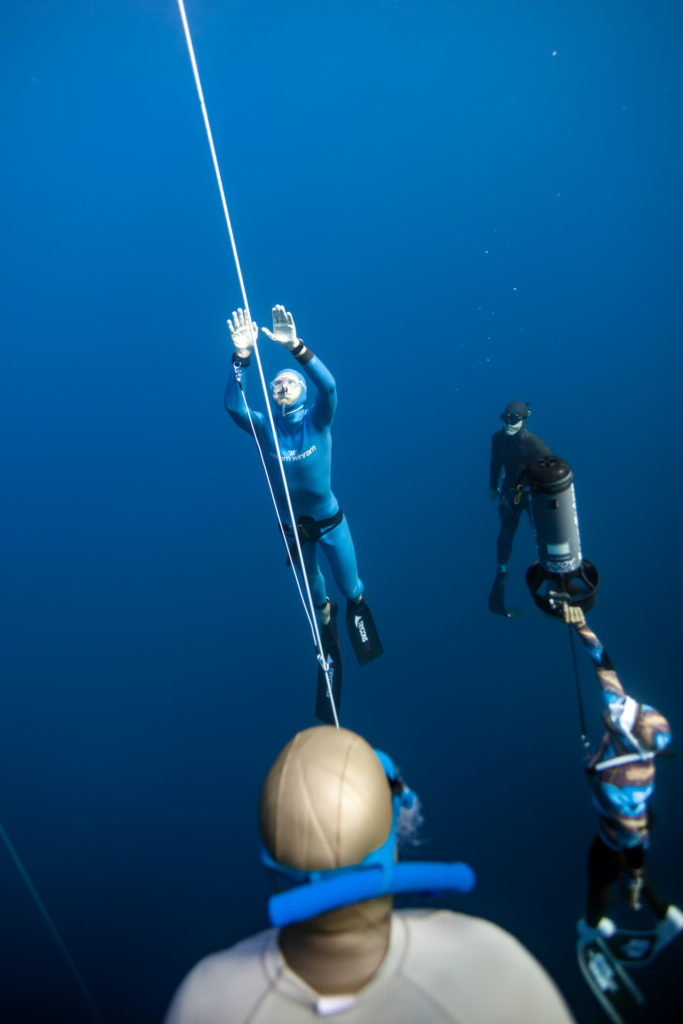 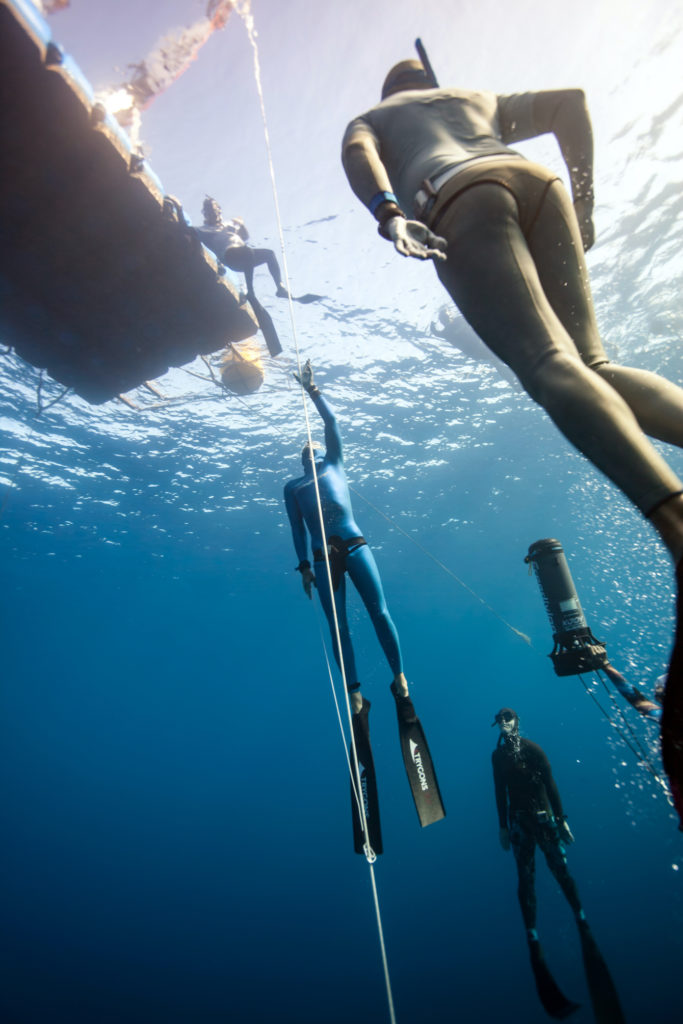 Is your head spinning yet? Sounds terrifying? For the rest of us, it could be, without proper preparation both on land (“dry”) and underwater (“wet”) especially at depth. Reaching 120m on Oct 21 and 130m on Oct 25, he made those dives look easy, remarked Pim Vermeulen, who along with Tolis Bellos were the appointed CMAS commissioners present to ratify the records. 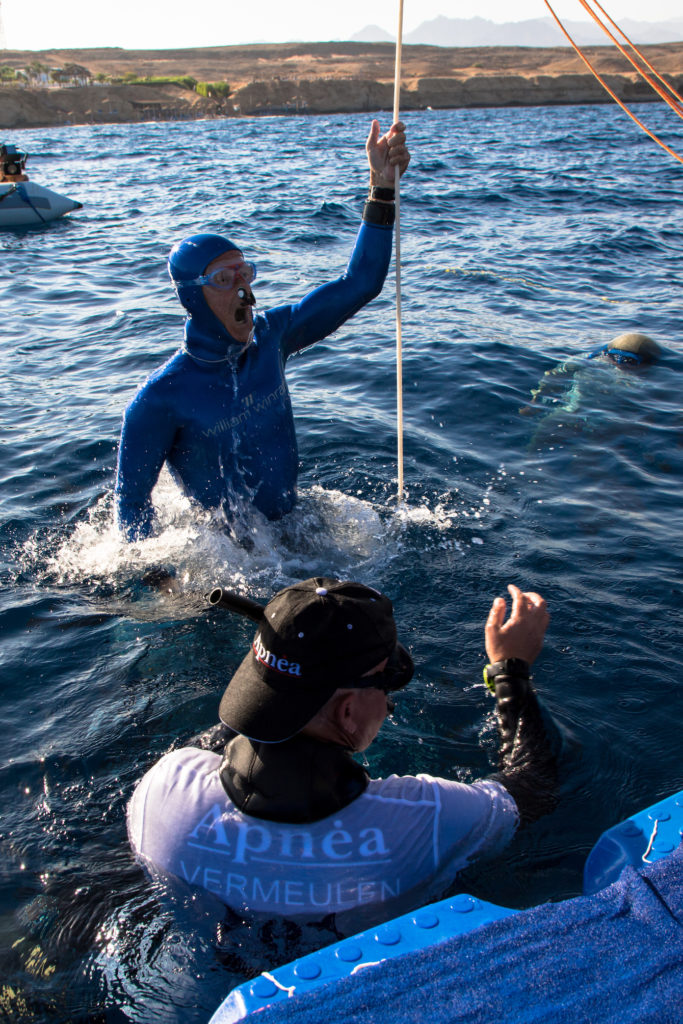 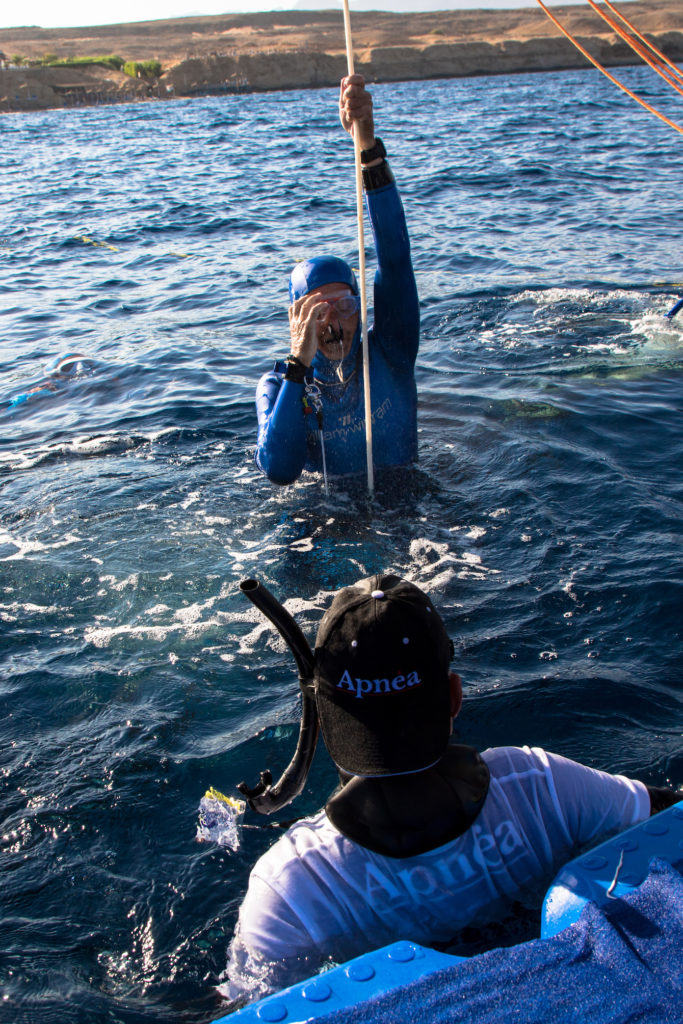 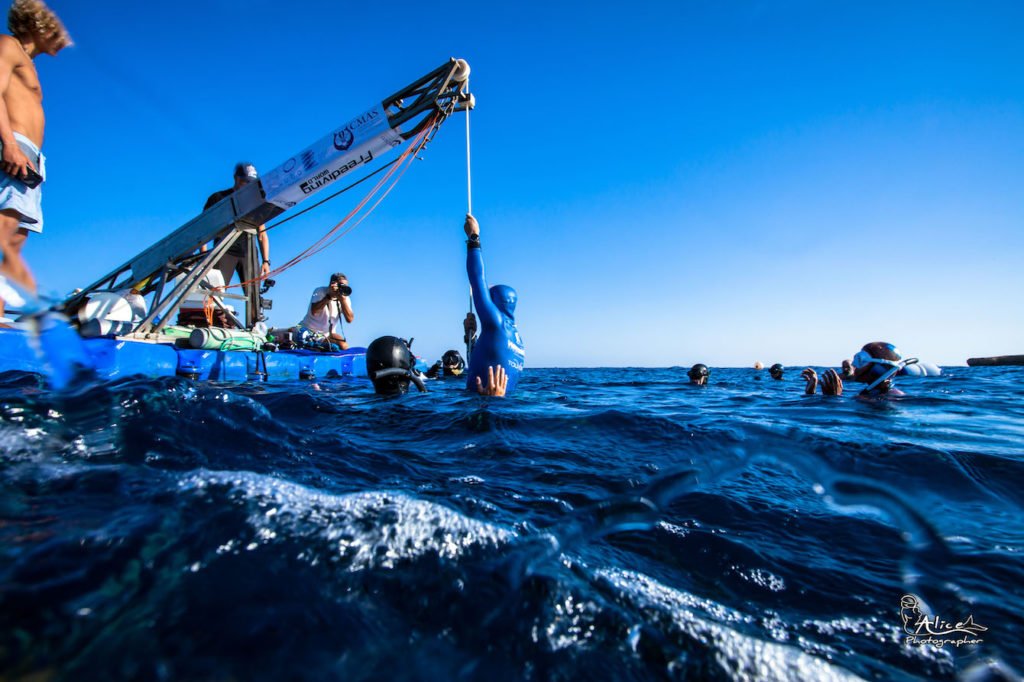 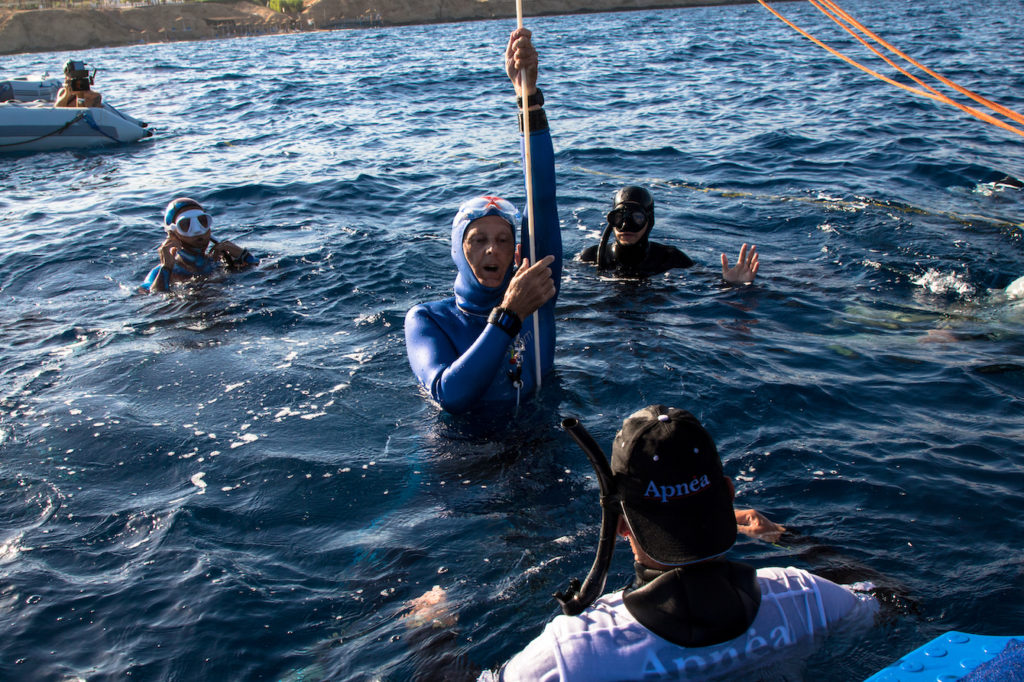 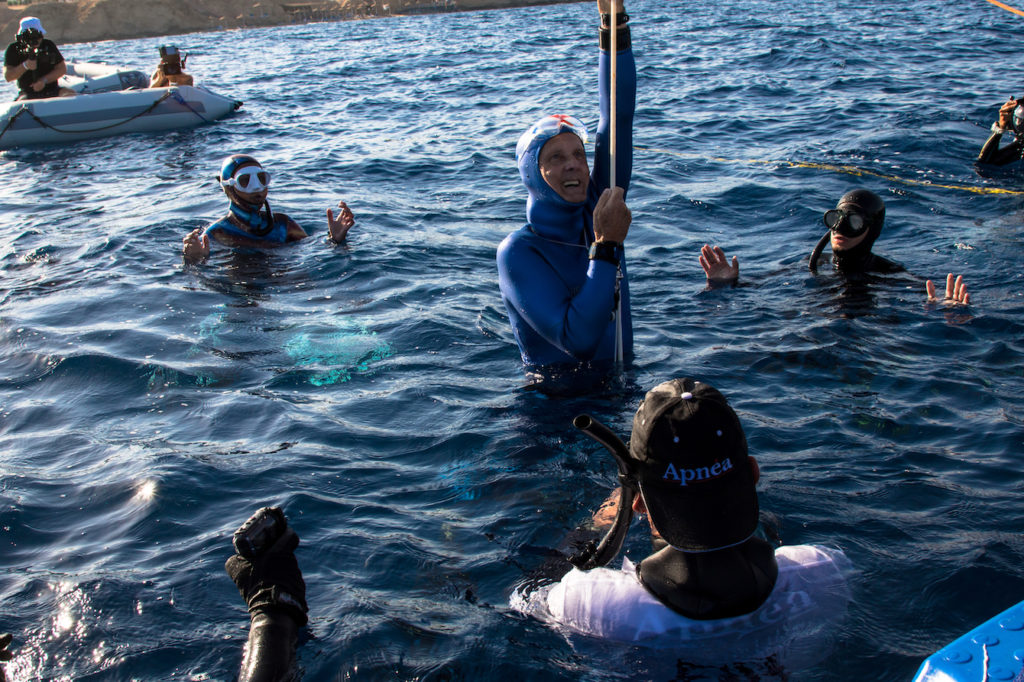 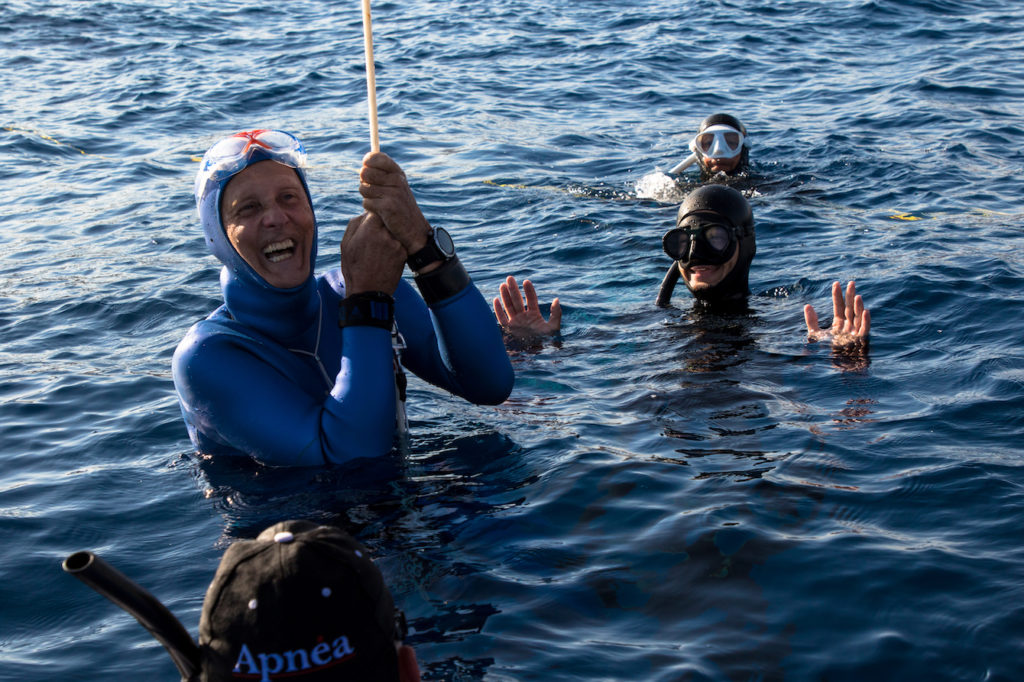 The event was organized by Andrea Zuccari of Freediving World and lasted over a span of 10 days, in Sharm El Sheikh, Egypt.

Q: What drives you to go after these records?

A: Well, multiple reasons. If I was animated by the sole desire to claim accolades and medals, I would have quit a long time ago. I came to the sport of competitive freediving quite late in life… In 2005, when I attended my first competition, I was 41. Most of my competitors were 20 years younger than me. Still I did quite well, was on the podium for two years but I eventually grew bored… I needed more, I needed meaning in the endeavour.

Q: Did you quit the sport?

A: I certainly didn’t, but in addition to competing, I started putting my breath-hold diving at the service of shark research in the beginning of 2008. I had always been fascinated by these creatures and being a sharp shooter with a speargun as well as a champion freediver, that combination of skills made me instrumental in placing telemetric and satellite tags on sharks. Holding my breath meant I could approach them naturally, more importantly, without scientists needing to capture them, which can be extremely stressful and sometimes even fatal to some of these species. I have been working in this field since that time.

Q: Is this why the International Union for the Conservation of Nature (IUCN) appointed you Ocean Ambassador of their Marine & Polar Program in 2013?

A: In 2012, I had founded the Watermen Project (link), a not-for-profit organisation which is dedicated to ocean and shark conservation through research and education via films and storytelling. Soon after, I was involved in the filming of a phenomenal IMAX documentary titled Great White Shark 3D which was released in 2013, the same year I had broken two freediving world records. My advocacy for the sharks and the oceans, combined with my records in the sport and my visibility on the big screen raised my profile so that I could leverage it to help shine a light on the plight of our oceans. I was more than happy to oblige. 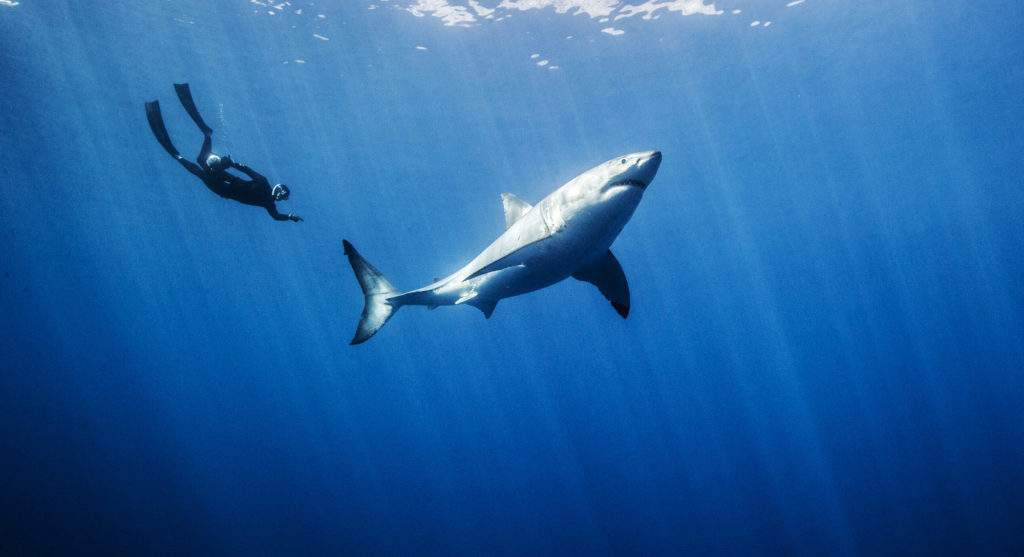 Q: How deep were your world records that year?

A: Back in May 2013, at the AIDA World Cup in Roatan, Honduras, I dove to 94m down and up with a pair of fins, which was a first, in competition. In September that same year, I broke the world record in Variable Weight, taking a sled down to 145m (475ft) (watch the video here) and swimming up with a monofin. This record was done within the AIDA Freediving Federation ratification, which allows pulling on the rope on the ascent.

Q: How deep did you dive in October this year?

A: It’s not quite the same discipline. The ride down on a sled is the same, but the rest is different. In 2013, according to AIDA rules, I was wearing a monofin to help me on the ascent and was allowed to pull the rope. This year, I attempted these records under the helm of CMAS, the other (and oldest) freediving federation. It has a distinct category for wearing a pair of fins for Variable Weight dives, which is a harder discipline. Also, CMAS doesn’t allow for rope pulling on the ascent.

Q: This all seems very technical.

A: Aren’t all sports?

Q: What are your sources of inspiration?

A: In the world of sport, Tom Brady is considered an old man in his sport, but he still continues to compete and essentially wants to continue to think outside the box and also thinks he could be competitive even at age 50. I believe him wholeheartedly. Look at Roger Federer, back when he started, being in one’s late twenties was considered old in the sport. Roger has continued to win Grand Slams well into his thirties. Why limit oneself?

But really, I’m inspired by anyone who has taken the time to hone the skills that makes them unique, whatever their trade or activity. Sometimes, inspiration even comes at the most surprising moment. At the end of 2014, I was ready to quit deep diving altogether because I had had a bad run of it in September 2014, where I suffered a bad bout of food poisoning 3 weeks before the record event started. This not too uncommon in Egypt, unfortunately, but at that time it required intra-venous antibiotics administered at home by a local doctor because I could not get out of bed. Needless to say, I wasn’t able to attempt anything during the record event. A film team was present at the time, with whom I had already collaborated for Great White Shark 3D. Even though they did not film me achieving record breaking depth, they went back to the studio with some footage of the 10 days spent with me. Early in the year 2015 I visited them with that “I’m done mindset”. Upon seeing the trailer they had put together, I saw freediving in a way I had never seen. It’s hard to describe what I felt but I can tell you that this experience reignited my desire to do more, I was inspired by their talent at weaving a story using sight and sound in a way that is outside the box. I wanted to do more. From that point on to today, there have been many bumps in the road, not the least of which was 2020 which put the world on hold. We’ve all had our lives tossed up in the air for almost two years now, so I’ve had a lot of time to focus on my personal training at home, dry. However, finding a window of opportunity to travel and to have the opportunity to train in the sea to acclimatize and then to gather a team to organize a record attempt event required some jumping around the calendar. Finally, dates were penned, and onward we went with the approval of the CMAS Federation. Commissioners were appointed, an anti-doping officer was dispatched, and a whole team of people gathered in Sharm el Sheikh to support this endeavour. I’m grateful to all of them. I couldn’t have done it without them. 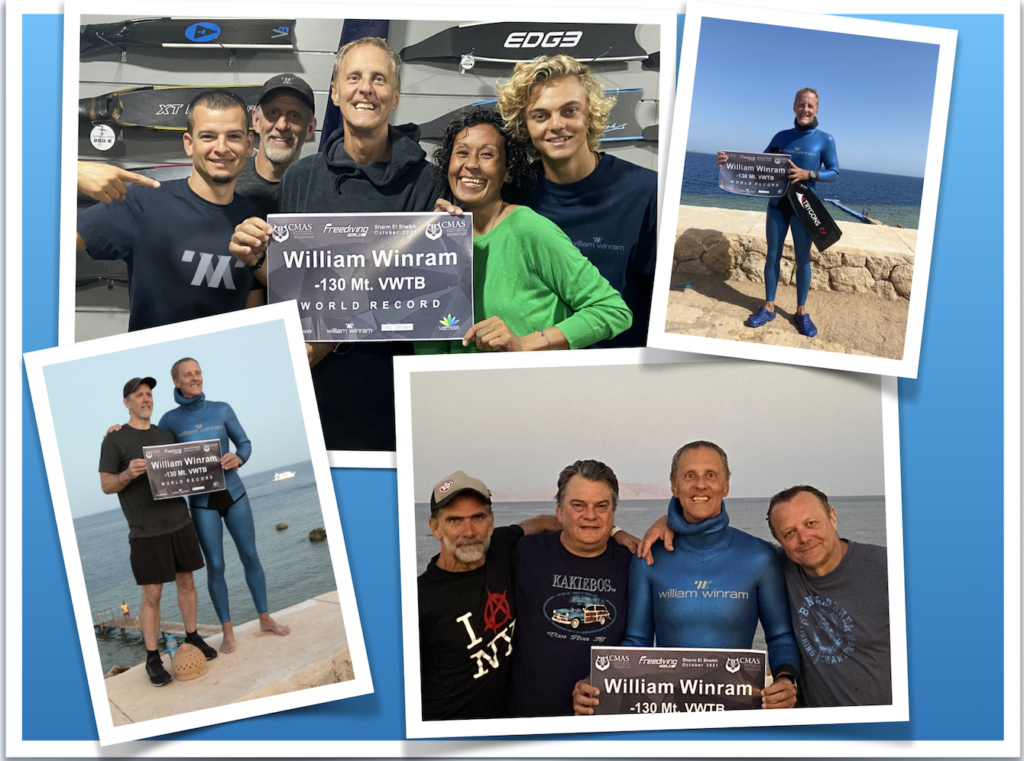 Redefining the limits of human potential

Q: How can you be in your late 50s and break world records in this demanding discipline?

A: I’m not the oldest to break world records… Rodolfo Robatti who attempted records during the same event this past month broke two himself. He’s been training with me for the past 9 years. When he first came to me to get coaching advice, I turned him down. I generally do that. People have to be really motivated to fullfill the goals they say they have. He persisted, so I put him through a thorough analysis of his physiology, his fitness levels, his posture, you name it. Then I designed a training plan for him, which I adjusted regularly based on his improvements and points of weakness. Additionally, he worked on his equalization skills with Italian freediving champion Andrea Zuccari, whom I also learned a great deal from and who is the worlds foremost authority on equalization. Rodolfo committed to himself and the training program. He had bumps on the road, like every athlete does, but in the long run, he’s ending this year’s diving season with his first two world records under his diving belt, Variable Weight Free Immersion, at 105m and 110m, riding a sled down and pulling up on the rope on the ascent. Oh, yes, I meant to say he’s 59. 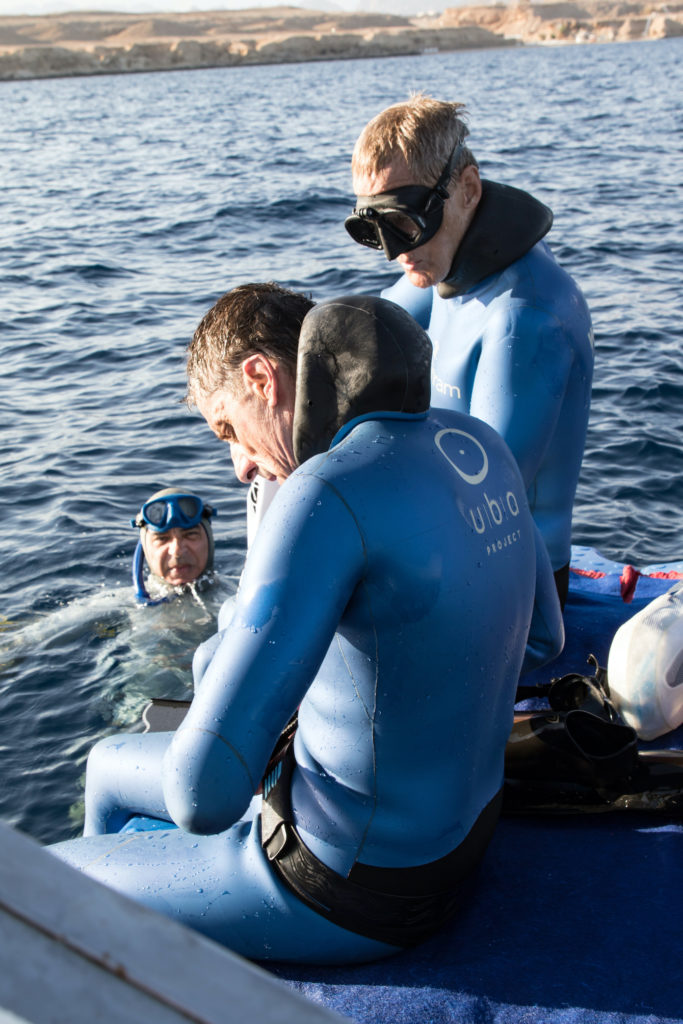 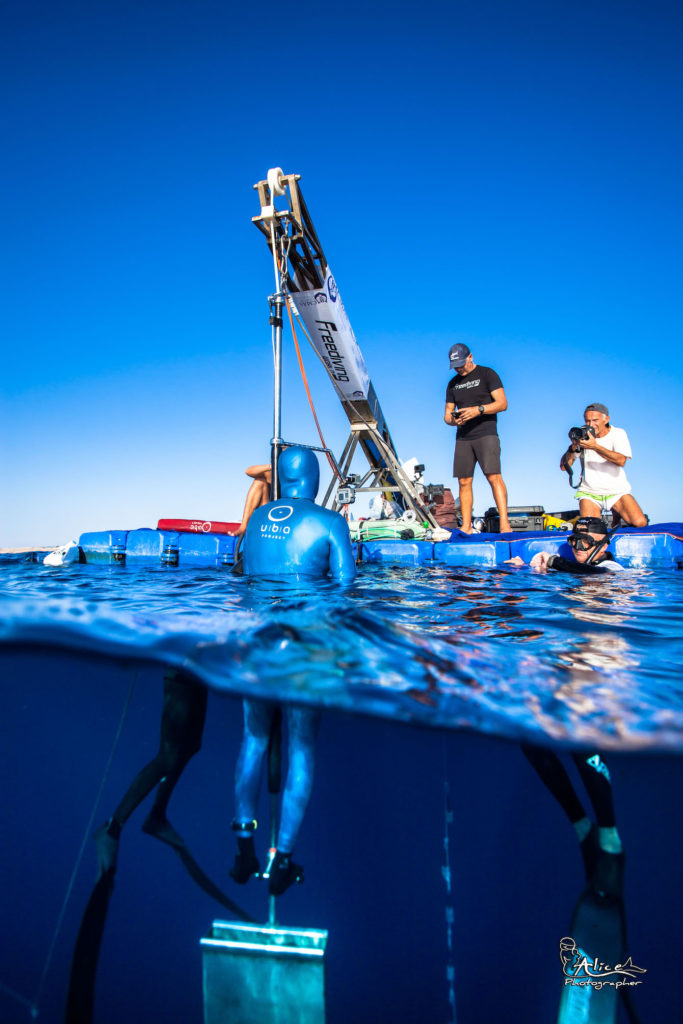 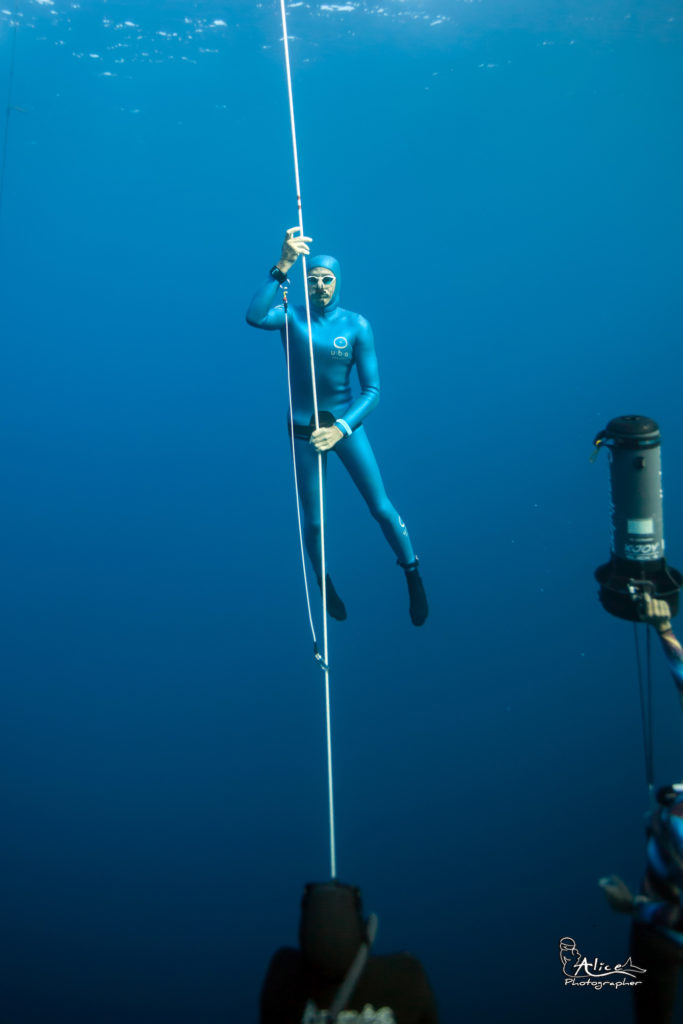 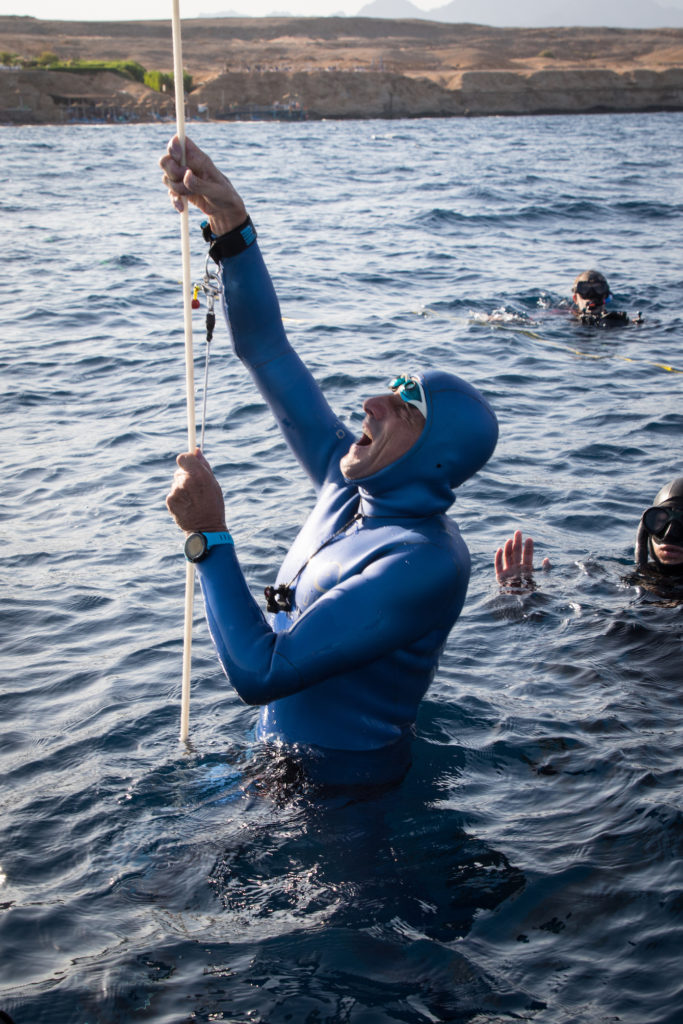 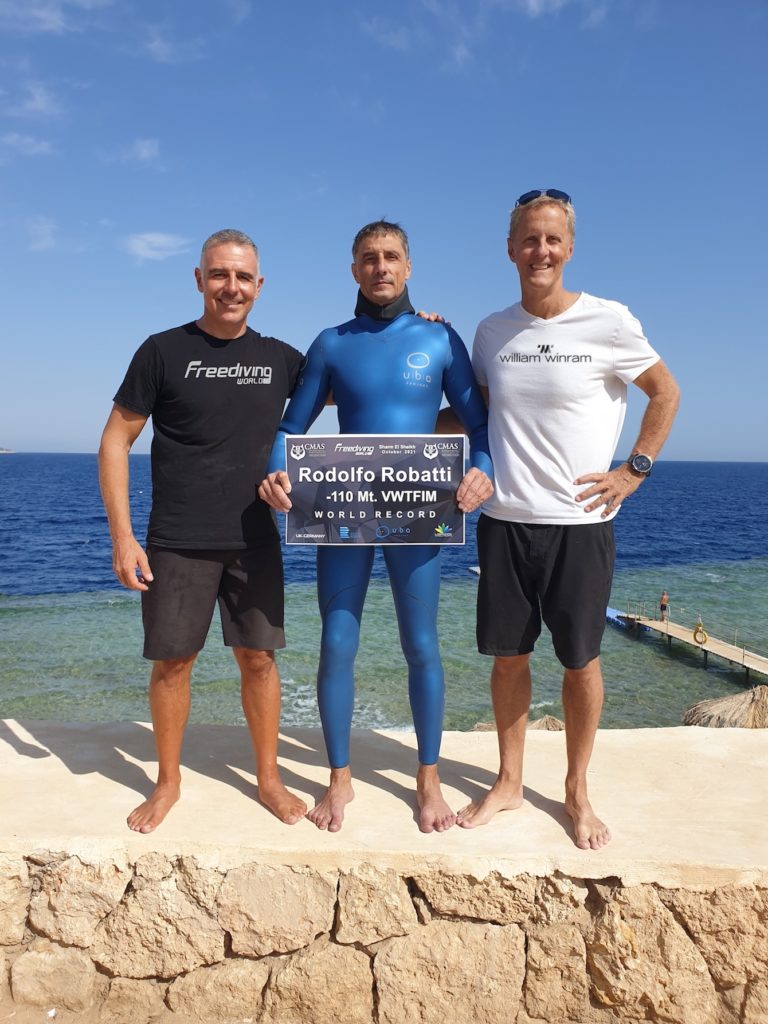 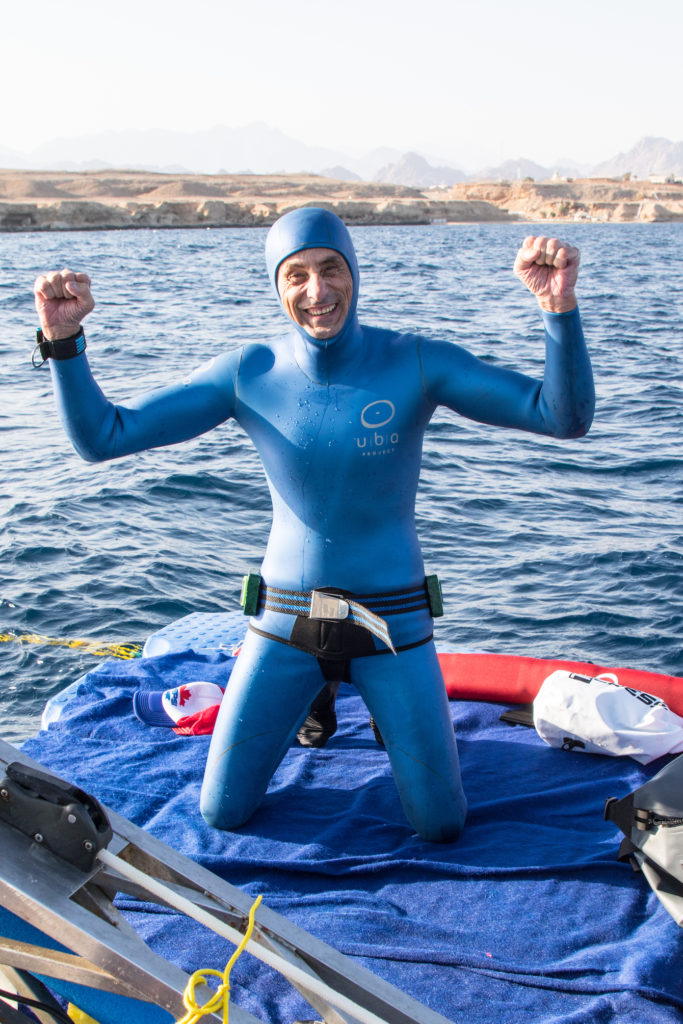 Q: You are saying that anyone can dive deep late in life? What about human limits?

A: One’s 50s hardly qualify as “late in life”. Human limits are under constant redefinition. All the skills I have learned across a convergence of fields across my multiple professional careers have me convinced that we’re no where near our limit. I prefer to speak of human potential.

Q: Can you be more specific?

A: I have discovered so much about my own health and how to properly recover from exertion. It’s fascinating because my findings aren’t just applicable to athletes, they’re applicable to everyone, regardless of their age or health status. Imagine if I could accelerate your recovery, how would that change your game as a high-level athlete or as a weekend warrior or someone with a high stress life? Anyone can benefit from these simple exercises which can improve quality of life and impact our longevity. What if I could help you increase your lung capacity by several litres or reduce your respiration rate naturally and improve your mental focus with simple accessible exercises – how would that or could that change your life?

Q: Does that mean you plan on breaking more records?

A: My training system has allowed me to safely increase my Vital Capacity by 2.5 liters in the span of 4 months and to cut my recovery time down in such a way that I perform better than I did ten years ago. Why would I stop exploring? I don’t know how deep I will be able to dive. I cannot predict anything, I can only set goals and keep exploring. I like to say that success is measured by the journey, not in meters or feet.

All photos of the world record event are © Alice Cattaneo

Photo of William with the great white shark is © Luke Cresswell